The Senate Foreign Relations Committee is finalizing legislation that would compensate U.S. diplomats taken hostage in 1979 and their families, using money paid in fines and forfeiture to the US government from businesses that have violated U.S. sanctions on Iran.

“This is a major breakthrough,” attorney Tom Lankford says of a proposal that has been carefully negotiated with the U.S. State Department. “We’ve got many people who are elderly and ailing and very, very ill, and we’re hopeful something is done very, very promptly.”

Under the agreement, surviving hostages would receive about $3 million each, and their spouses $600,000, under a deal brokered with the State Department by Georgia Republican Senator Johnny Isakson and Maryland Democrat Senator Ben Cardin.

The U.S. diplomats taken hostage by revolutionary “students” loyal to Ayatollah Khomeini have faced a legal barrier that has prevented them from getting a judgment against the Iranian regime in U.S. courts.

The U.S. agreement with Iran that led to the captives’ 1981 release, known as the Algiers Accords, prohibits the former hostages from seeking damages from Iran. Against that backdrop, they have lost their court battles, as administrations under different presidents have stood by the terms of that agreement.

The Department of Justice announced last month that it would set aside a portion of the $15.5 billion in sanctions violation fines, penalties and forfeited assets paid by banks, to compensate individuals who have been “harmed” by the actions of Iran, Sudan, and Cuba. These three are the last remaining state sponsors of international terrorism.

In information released in May, DoJ said their first priority would be to compensate individuals “harmed” by the state sponsors between 2004-2012, roughly the period of the sanctions violations committed by the banks assessed with the largest penalties.

But they held the door open to victims of state actions that occurred before or after those years. Last week’s bipartisan agreement at the Senate Foreign Relations committee appears to be aimed at pushing the DoJ to open the window wider.

That’s the key question that came out of Friday’s court hearing in New York, where BNP Paribas was formally sentenced to forfeit $8.9 billion to the feds.

The U.S. government announced a system Friday to compensate people harmed by Sudan, Iran and Cuba using some of the $8.9 billion forfeited by France’s largest bank for violating U.S. economic sanctions by processing transactions for clients in blacklisted countries.

Source: US seeks to compensate victims of Sudan, Iran and Cuba – The Washington Post

But any of the money actually reach terror victims?

From the same article:

New York Mayor Bill de Blasio noted in a release that $448 million of the BNP forfeiture will go to the Manhattan district attorney’s office and $447 million to the city, some of which will be used to equip all police officers with smartphones.

And for more than a dozen victims of the 1998 U.S. embassy bombings in Africa who showed up in court, the announcement that the feds wanted them to file a claim on the funds at http://usvbnpp.com was a let down.

“Total disappointment,” said Marina Kirima, a Seattle resident who worked at the embassy in Kenya when it was bombed. “It’s like starting all over again.”

This is the new blog of the Fleming Timmerman Law Group, pllc. We are located in Washington, DC and have been working to help victims of Iranian regime state-sponsored terrorism for the past 18 years. 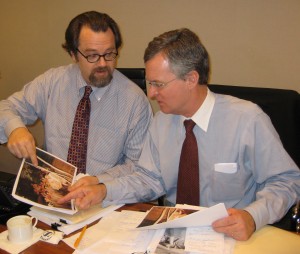 Ken Timmerman began working to identify Islamic regime assets on behalf of victims of terrorism in 1997. Tim Fleming joined a consortium of lawyers representing victims of the 9/11 attacks in 2003.

In the picture above, Ken is on the right and Tim is on the left. That’s how we are in real life, as well – a political odd-couple in the fight for justice on behalf of the victims of the Islamic Republic of Iran.